Earlier this fall, Bay Farm School 6th graders, teachers, chaperones, and Principal Katherine Crawford traveled to Mother Lode in Coloma, Calif., for an annual overnight field trip. While we were at Mother Lode we learned about leadership, bravery, and kindness. There was not one person that didn’t overcome a fear or improve on a skill.

On the very first day we played the Blob game. It was a pretty sticky game–get it? We then formed our hiking groups. There were two or three chaperones for each group. A couple groups were lucky enough to meet Charley the dog. He was medium sized and looked like a snow dog. When I first noticed him, he was roaming around the volleyball court and was being followed by students.

Before the first day ended, we were sorted into cabins, and then it was free time! Students played volleyball, Speed, B.S, Uno, Zombie tag, or some read or caught up with friends. Soon dinner was ready, and we ate yummy tacos, burritos and chips with salsa.

On the second day, we were all busy with high ropes and water activities like the Leap of Faith, Catwalk, river rafting, rock climbing, ziplining, and the Pipe Dream. The Leap of Faith was 40 feet up in the air in a pine tree. I still can’t believe we jumped off of a 40-foot tree!

“Falling off the Leap of Faith was fun!” said Lauren Y.

I think all of the 6th graders would agree that this trip brought us closer together and the activities were outstanding. Around dawn, Mrs. Oducayen brought a large group of kids down to the water and they had a blast playing in the water, laying down and sticking their feet in. The water felt like ice. My body was freezing, because I was laying down in the water for 15 or 20 minutes. Crazy right?!

Around dinner time there was a volleyball bet between the chaperones and kids–the winner would get to eat dinner first. We sadly lost, but it was so much fun playing. Good game parents! At dinner, we ate spaghetti with veggies and homemade garlic bread. Everybody turned into savages and hoarded the garlic bread. It was like Black Friday but for food.

Sadly the last day of our trip arrived. For the first activity we were given a choice to pick from yoga, a cappella, d.i.y bracelets, or go down to the river and learn more about it. Meanwhile, parents got to do the rope courses. We then went into our hiking groups, for the last time. In the meetings we were notified about a d.i.y boat parade! 30 minutes later it was time for the boat parade, and there was one group that didn’t follow the rules. The group wasn’t told about how small their boat had to be, so they made a humongous boat and they made it into the letter A. They called it A+. Unfortunately the boat got stuck on a rock and was left behind, but the other boats were slowly flowing away down stream. We then had our last meal (lunch) before we left, sandwiches with gold fish and crackers.

Thanks to our chaperones–they were amazing and very nice to us. Thank you chaperones for coming on our trip and helping make this the best trip ever. Thank you Mrs. Oducayen and Mrs. Reynolds for taking us on the trip. Lastly, special thanks to Mother Lode for accommodating us and helping us overcome some of our fears.

Here are some takeaways from my fellow 6th graders:

“It was pretty fun, but Marin Nature Bridge was the best!” -Israel N.

“There was way more drama than needed.” -Becka F.

“I would like to compliment my instructor, because he always encouraged us to try new things. Also everybody in my cabin was afraid of spiders.” -Rowan W.

“I liked the s’mores and zipline.” -Alana H.

“I liked the ziplining.” -Megan C.

“I liked the Leap of Faith.” -Natalie C.

“Volleyball, just volleyball. Also I made new friends!” -Bella B.

“Falling in the river.” -Christopher Q. 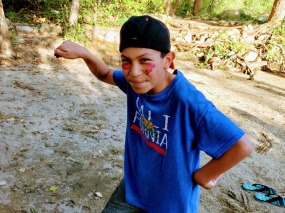 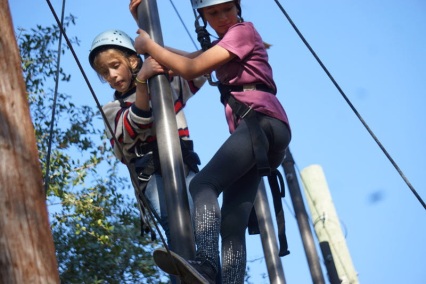