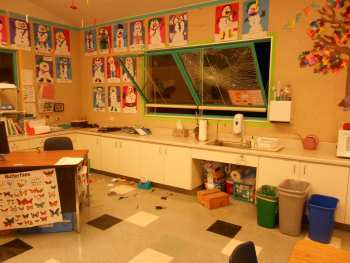 The vandals broke in through a window and proceeded to turn tables over, spray paint graffiti on a wall, destroy a fire extinguisher, and ruin some of the kindergarten student’s 100 Day Projects. The damage to the kindergartners’ 100 Day Projects was especially difficult for the young students to understand.

There was also some minor graffiti found on the Bay Farm Middle School play structure during the same incident. Several teens were reportedly detained but none were charged or cited.

Bay Farm School has been vandalized many times in the last few years, including graffiti painted on the walls, a fire set in a garbage can and damage to the gardens.

Do you have thoughts about vandalism at Bay Farm School? Or ideas about what can be done? Send your suggestions in a Letter to the Editor, at the bottom of this page.