Bay Farm volleyball had a great season this year featuring players from sixth, seventh, and eighth grades. They played with their best effort, and showed amazing teamwork. 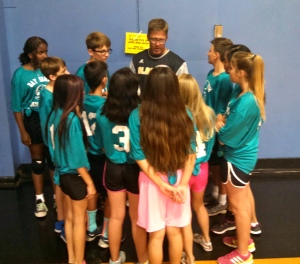 On Nov. 4 Bay Farm took on Lincoln Middle School. In the first game, Bay Farm and Lincoln were knotted up 13-13 until Lincoln made a move, taking the game 21-15. It was a good game with amazing effort from both teams.

In the second game, Lincoln got off to a good start, leading 8-3. Bay Farm fought back, but couldn’t overcome the deficit, losing 21-12. It would be the last time that Bay Farm would play Lincoln.

“It was a tragic loss,” said seventh-grader Megan Tansey.

On Nov. 12 at The Point Gym, Bay Farm took on the Encinal Junior Jets in their last game of the season. In the first game, both teams played with amazing effort, but Bay Farm came out on top with a 21-14 win. In the second game, Bay Farm topped Encinal again by taking a giant leap in the score. When the game was over, Bay Farm had won it 21-6.

“It was a really good game, with amazing teamwork from everyone,” said seventh-grader Tucker Triplett.